I don’t even know where to begin with this Journal. I am at-a-lose for words to explain this astonishing experience of our being invited to this event. Having been to multiples weddings in India I was totally unprepared for what happen at this Paradhi village wedding. In the first place for an outsider to even be invited was extraordinary.
Jugani, Vasentha’s sister, had given us the invitation and the Chief had insisted we attend. There are two things I really hate in India and hope never to have to experience . . . one is to have to go to a hospital and second is to drive on village roads at night. As you will see I survived the second. LOL
We were prepared to leave campus with Nupi, Suresh, Shini and Rachael at 5:30 pm when Dr. Suresh gets a phone call from Sheshi that the groom had not yet left his village for the wedding that was suppose to start at six. So we quickly decided to eat our dinner, knowing that we would be starved with this delay by the time we got back to campus. Sheshi said she would call again when the groom was on his way. We ate . . . we waited . . . and waited. Finally, the call came. (Side note: almost every Indian, rich or poor has a cell phone in India. They may not have toilet facilities, running water or electricity, but they have a cell phone. It may, or may not work.) Off we go, now in the dark, to the jungle village of Vasentha. It was a white-knuckled ride but as we approached we could see bright lights in the distance. We learned that the wireman sells illegal electricity to this village. He charges 100 rps. per family. Nice side business, ya’ think? 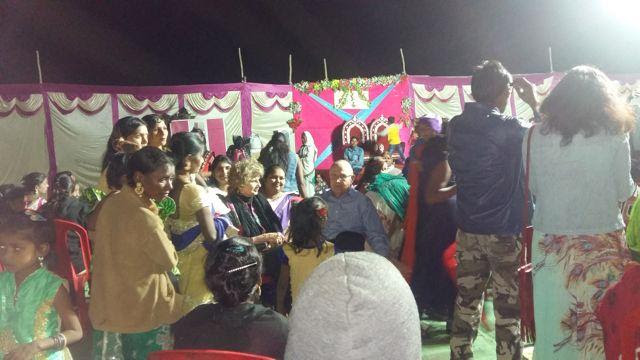 There was a red and white pendahl and loud, wild music coming from the venue set in a field behind the village. Upon arrival, Sheshi met the car and grabbed my hand in a death grip and off we went. She parted the crowd like Moses parted the waters. Stumbling on the uneven ground to try and keep up with her I was thankful when we finally arrived at the center of the area where she commandeered five of the total of fifteen chairs at the event of more than 500 people. 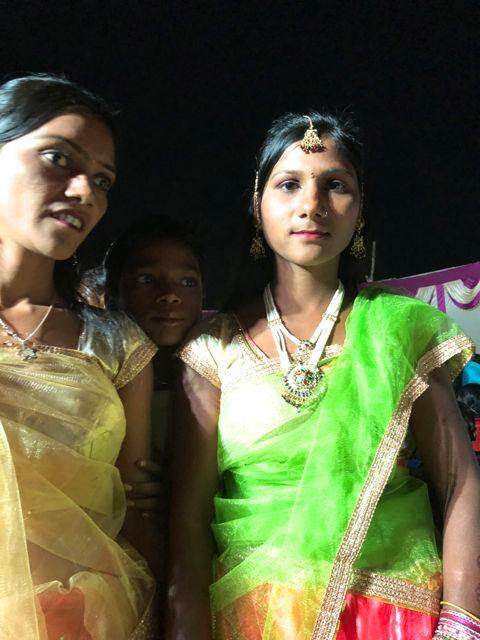 The Chief’s daughters
As we waited AGAIN for the groom to arrive, I was inundated with requests for “Selfie.” The only English word these young Paradhis speak. Dr. Suresh said, “They are calling you a heroine.” Whatever, they all wanted a picture with me . . . too funny.  Everyone was dressed in their finest.They spend money they don’t have to be a part of the festivities. 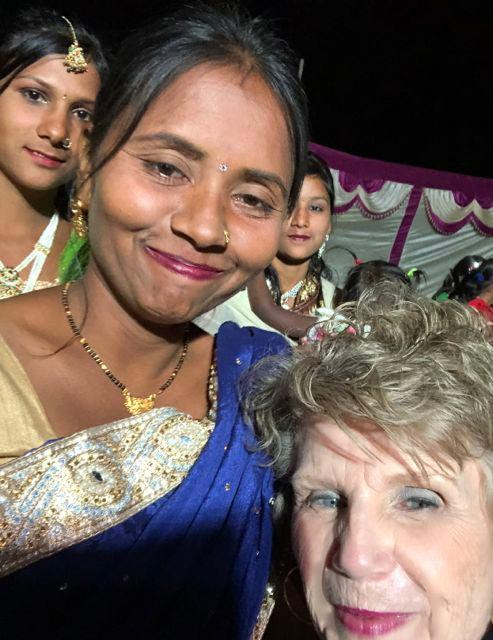 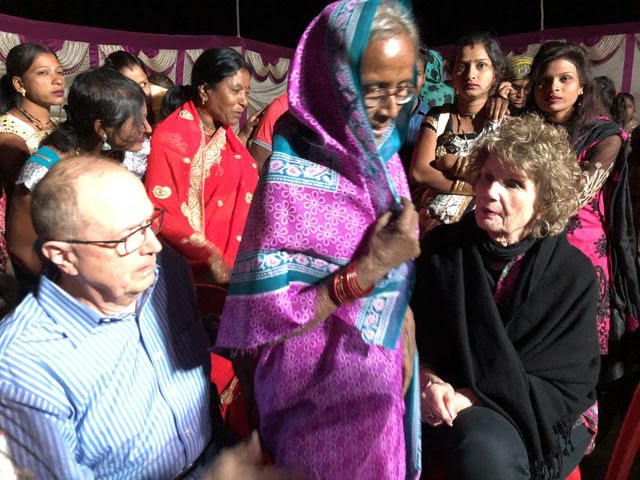 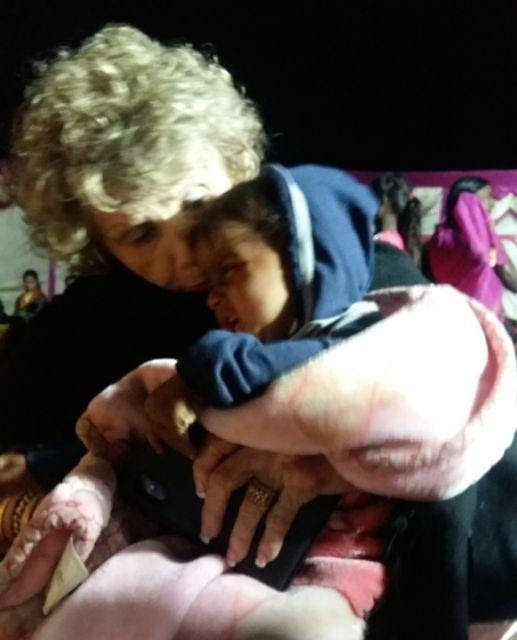 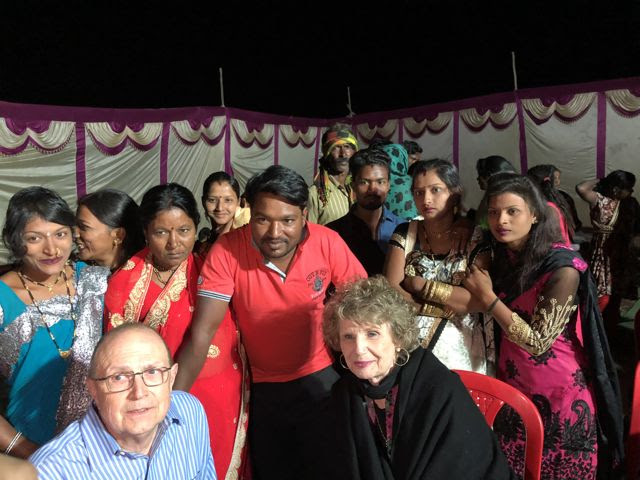 All of a sudden, they scattered like flies and I looked up to see the Chief standing in our midst with his arms crossed across his chest. He definitely is in control. He looked at Loren and said, (translated by Shini) “You look cold. Here, take my jacket.” Loren tried not to accept but there was no denying him this gesture. He said, “You have given us so much, we need to give back,” He was proud as a peacock to see Loren in his jacket. 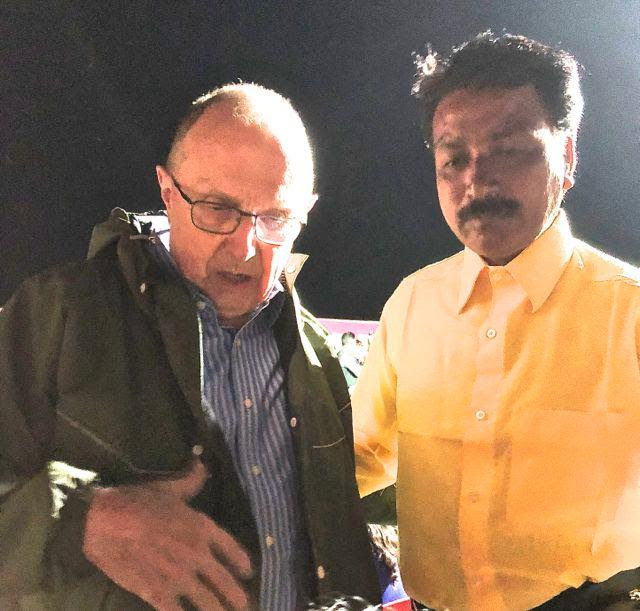 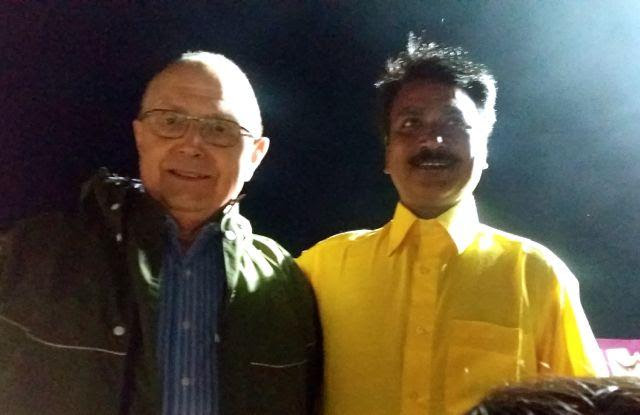 Finally, the groom arrived on stage. 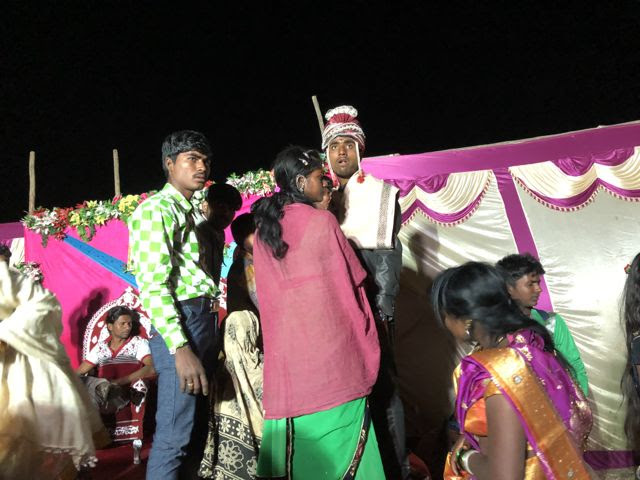 We learned later that Dr. Suresh had been negotiating with him to come in and start the ceremony. Vasentha matched him with his sister Jugani, before the accident. Vasentha had promised him a NICE watch as a dowry. Well, Vasentha’s mother bought a watch off the road and the young man was offended. As God works, we had, along with Nupi ad Suresh, had bought as a wedding gift a pair of NICE watches for the bride and groom. Dr. Suresh was able to convince the young groom to go forward with the marriage ceremony because we were family and therefore fulfilled the conditions of the dowry of a watch. 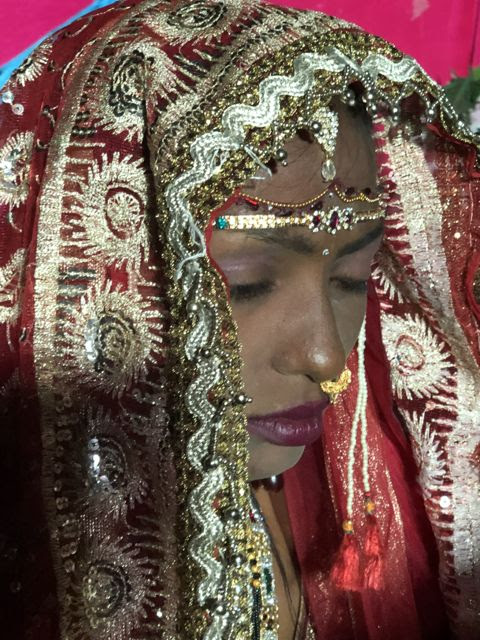 Abruptly with no fanfare the bride appeared on the platform. 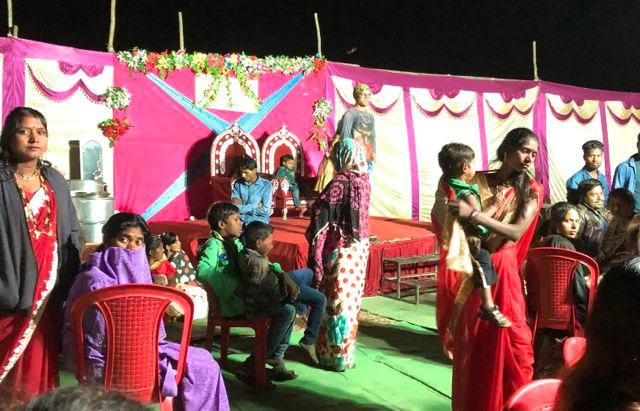 ALL Indian weddings again, whether rich or poor, Christian, Hindu and Animalistic have decorative red chairs for the wedding. We were again, hand grabbed, ushered to the platform. It was sheer chaos! No one person is in charge. There was yelling and all kinds of instructions given. The ceremony was taking place. 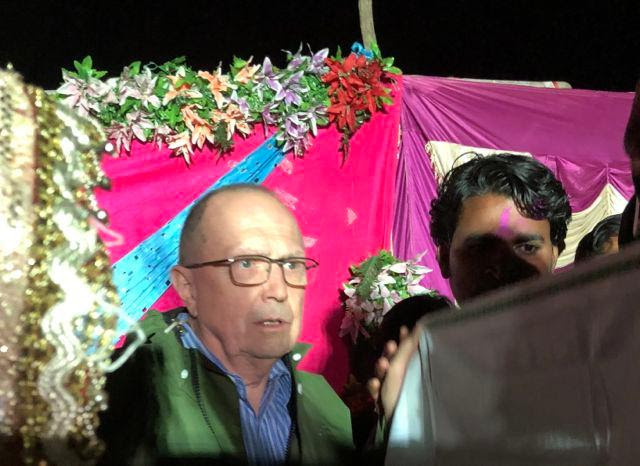 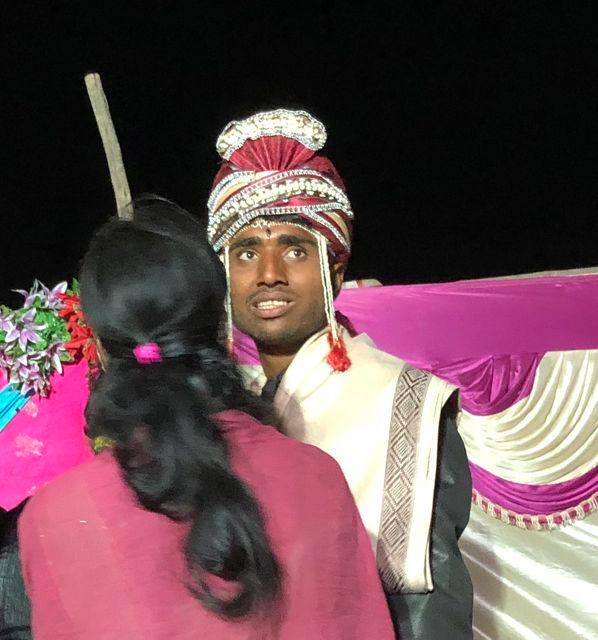 Suddenly, to the utter shock of Suresh and Loren, the ceremonially white shawl was handed to them. It was to be held by “esteemed elder men” of the family. 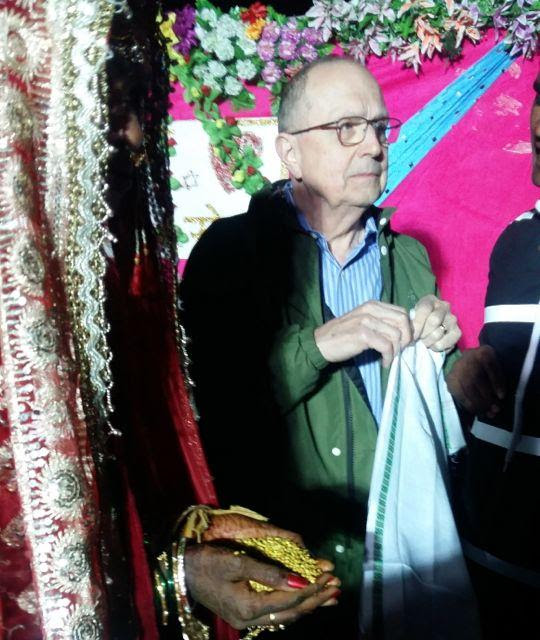 The yelling got louder and finally the so-called leader took out his cell phone and started TRYING to sing the priestly chant. Not unlike a sick cow. Nupi and I got the giggles till our sides hurt. We learned that the PA system had failed to work so he simply dialed the pre-recorded priestly chant. Ingenuity, don’t you think? We then put the NICE watches on the couple. After that we formed a circle around the couple and prayed. Everyone stopped the yelling and commotion. They knew the power of the God of creation was there, even if they didn’t understand it.
The colored rice, akshida began to be thrown by the pan full. It actually hurt. So I covered my head with my shawl to ward if off. Needless to say, we had it everywhere.
Wanting to see the cooks and how food for this horde of people was prepared, again Sheshi gripped my hand and off we went. I have never seen chapattis this size. Loren and Suresh both wanted to taste, but no way was it allowed. 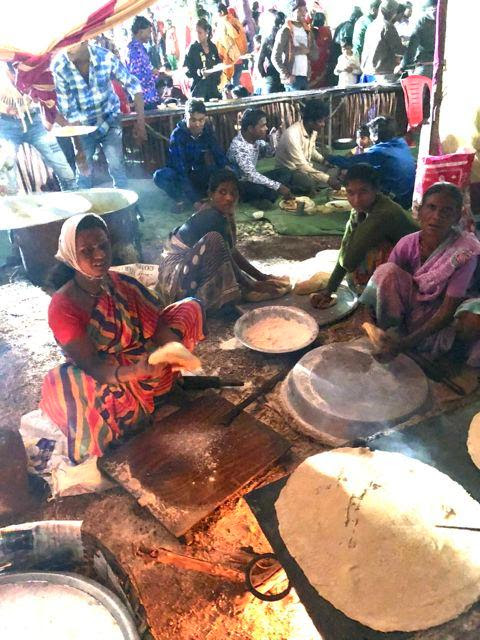 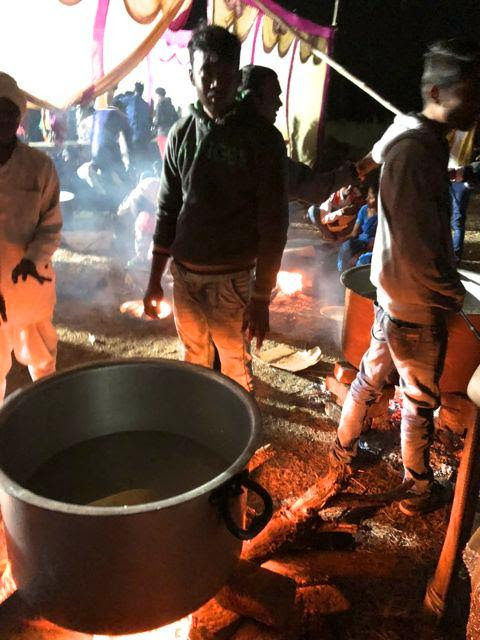 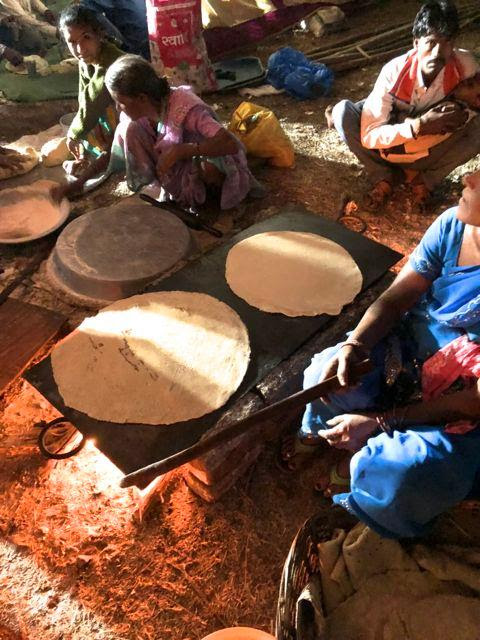 Back in the Qualis there was a sense of awe at the experience we had all just been allowed to participate in. The ride home didn’t seem to be so harrowing due to our joy. God is continuing to work in this village and tribe even after the death of Vasentha.